Are Horse Owners Being Blinded By The Bling?

Category: Thoughts from the Keyboard

I have just been looking at other makes and models of saddle online, to get an idea of how the price of BALANCE saddles compares to what else is available.
We have reluctantly had to increase our prices again, after the manufactures have announced  another big, and immediate increase, due to them having to allow for the impact of Brexit and Covid.

In looking around, it made me realise how much fashion is influencing the design of saddles now.   I have to confess to being a bit of an old curmudgeon about the look of saddles.   I like them to look workmanlike and classical, but I can understand the appeal of being able to bling up a new saddle, with trim in all sorts of colours and even with crystals, which is increasingly popular these days.

As far as I am concerned, if the bling doesn’t take anything away from the horse’s comfort, it doesn’t matter to me what kind of creative ideas their owners might have.
But, bling aside, the other thing it made me realise, is that there are so many saddles now being made with fancy stitching patterns, all sorts of external blocks, mono-flaps and adjustable trees.  The BALANCE range probably looks very simple, even basic by comparison.  I had a mad moment, where I thought, should I look into offering some more fancy features into the BALANCE range, but then got a grip and decided that it might be more sensible to explain to you, why we (BALANCE) do not offer some of these options. 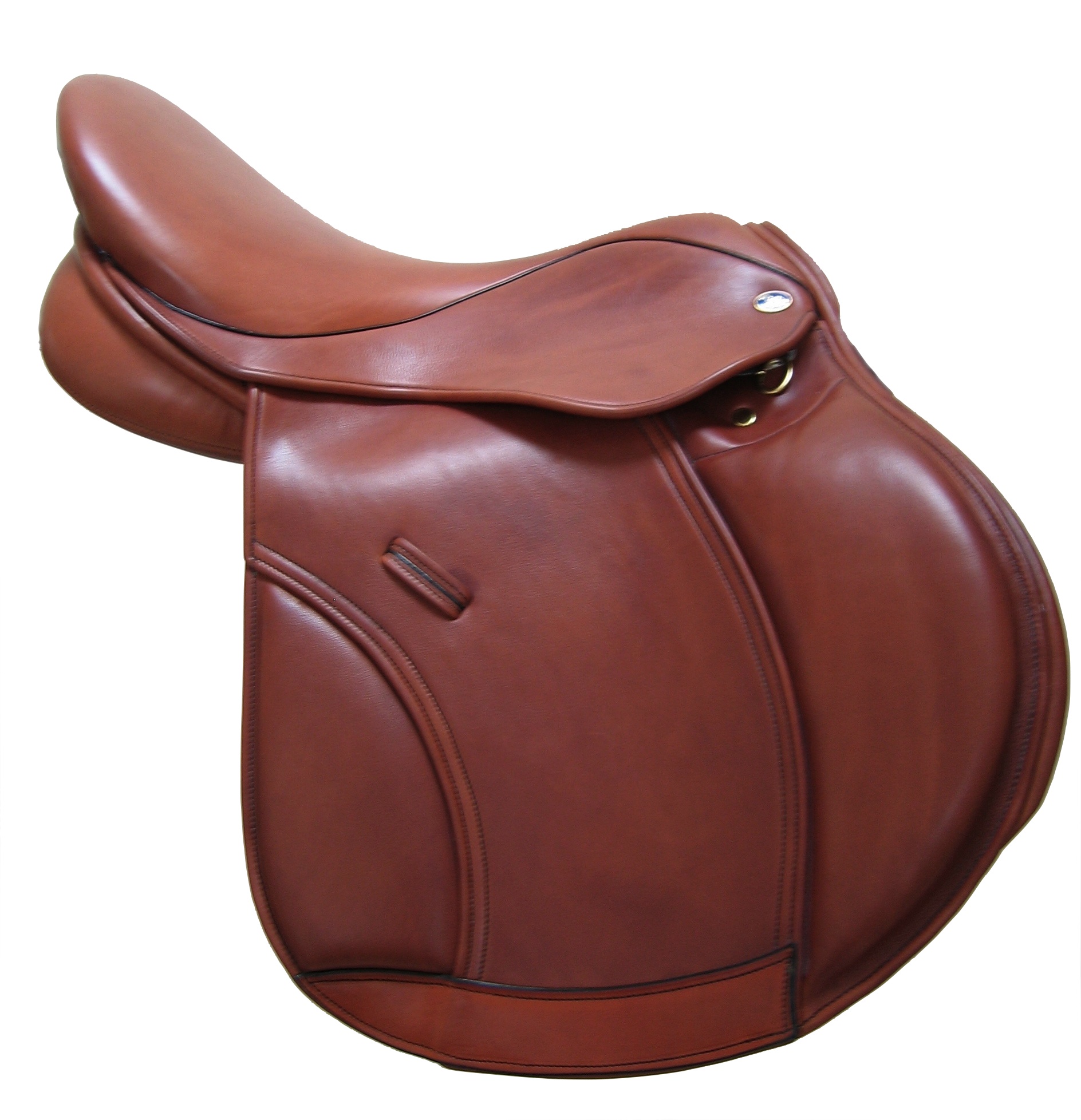 Some saddles are made with what are called a ‘covered flap’.  This means that the flap is made from 2 layers of thin leather glued and stitched together and sometimes these have a very thin layer of foam glued between them to create a different look.  You will sometimes see calf-skin mentioned because this is the soft, thinner leather that is often used as the top layer, because it looks very attractive and has a soft, pliable feel.

This saddle has a covered flap, and you can see that it has more stitching than on a plain flap.  All of this stitching is prone to wear and the thinner leathers themselves are more delicate and can wear out.
You will see that on this saddle, there is something called a ‘rubbing strip’ along the bottom to try to protect the bottom edge of the covered flap from damage from the stirrup leathers and the riders boots.
This is a BALANCE saddle, that we included in the Xtreme range for a short time, but soon dropped it because we could see that these saddles would not last as long as a plain flap.

This is another trend that has been around for a while, and we often get asked whether we do a BALANCE saddle with a mono-flap.
We don’t do a mono-flap, because we have never much point to it as a design feature.

There is an argument that it gives a beneficial close contact feel for the rider, because it is one less layer of leather, between the rider and the horse.   However, in most cases, there are still two layers of leather, because the girth straps are usually sandwiched between two layers of leather.
So, it is hard to see how this arrangement can be promoted as being less bulky for the rider than a standard flap with a sweat flap.
Another issue, is that a mono-flap makes it necessary to use a short girth.  Now, it is possible to use a short ‘dressage’ girth with long girth straps in a way that many horses can cope with well, but we have, over the past 25+ years,  seen so many instances where, given a choice, horses show a preference (through their movement) for long girths, that we do encourage that to be considered.
There is no doubt, that riders can express a preference for using long girth straps that avoid them having any extra bulk sitting under their legs, but if the girth is the right length, the buckles of the girth tend to sit in the crook of the riders knees, and keep out of the way.

Long girth straps as needed for Mono-Flap saddles are also less stable on the horse.  Maybe not such an issue for Dressage saddles, but definitely a potential issue on jump saddles.
So, we will not refuse to supply any model and style of BALANCE saddle with long girth straps, we always like to make sure that the horse owner understands the pros and cons.

This is something that has become quite trendy in recent years and I do understand that in today’s market, saddle makers are keen to try to make their product stand out from the crowd.
Adding lots of stitching in interesting patterns and adding various blocks on the flaps are a couple of things that can look impressive when you are looking at endless pictures of saddles online.   One only has to look at Social Media to realise that saddles and other items of riding equipment and clothing has become rather like designer clothes, shoes and handbags!

Riding is a social type of hobby (when we are not in the middle of a pandemic!) and I know that horse owners are often caught up in the trap of trying to be accepted by the other trendy people on the yard, or in the riding club!  We all know who they are 😉.

So, it is easy to understand that a simple and classical design of saddle like a Zenith Dressage Saddle for example, might not look impressive enough for the people on the yard, who like to let everyone know that they have just bought the latest, must have, saddle!

Fancy stitching is not going to cause a problem to the horse, but is just one more thing that could wear and then be costly to repair and the blocks are not a great idea unless they happen to be in exactly the right place for you as a rider, and you don’t want any versatility in being able to adjust your riding position.
We don’t like to encourage the use of very big thigh/knee blocks at the front of dressage saddles, because they tend to be used by the rider to brace against and that is not helpful to the horse, because when a rider braces against the structures of the saddle, they are also bracing against the horse and often moving the saddle up onto the back of the horses shoulders!
Don’t forget Carol and I came from a riding teaching/training back ground, so we know how saddles either support or interfere with good riding too.
For jump saddles, there is a definite concern about anything that locks the rider onto the saddle too securely, particularly in a cross country saddle, where there are times when it is important to be able to part company easily from the horse to avoid serious injury.  Rotational falls, being a good example.  That is why we don’t use sticky leathers for the seats of our jump saddles.

Complexity is often used to avoid looking into the depth of Simplicity.

That is another one of Carol Brett’s little sayings!   That’s deep man ……. deep. 😄

Saddle makers are in the business of making things that they need horse owners to want.   There is so much choice now, that they have to come up with all sorts of attractive gimmicks to be desirable to the horse owners/riders who are in charge of the credit card!

Meantime, if you are looking at the BALANCE range of saddles, you know that a great deal of thought, effort and investment has been made into producing saddles that do the job they are designed to do, which is to keep out of the way of the horse and the rider.
They are designed and made, well-enough to provide good and reliable service for 20 years and more, and there are many BALANCE saddles that are still going strong and helping horses to be comfortable after 25 years of hard use!  Amazing value for money, considering how adaptable they are as part of our saddling system.

I can only tell you that in the many years we have been designing and supplying saddles, we have been open to looking at ways to make them look attractive as well as doing an amazing job at keeping horses comfortable.   We have always had a very good reason for not including some of the more trendy features you will find in many saddles at the moment.

Just because… we try to stay true to our core ethos of putting the horse first, and not getting distracted away from that path, and the horse owners who love BALANCE saddles, love them because of what they do for the horses they care about.

Here are a few pictures of BALANCE saddles that have been customised, just for the fun of it and there is nothing wrong with that. 😊 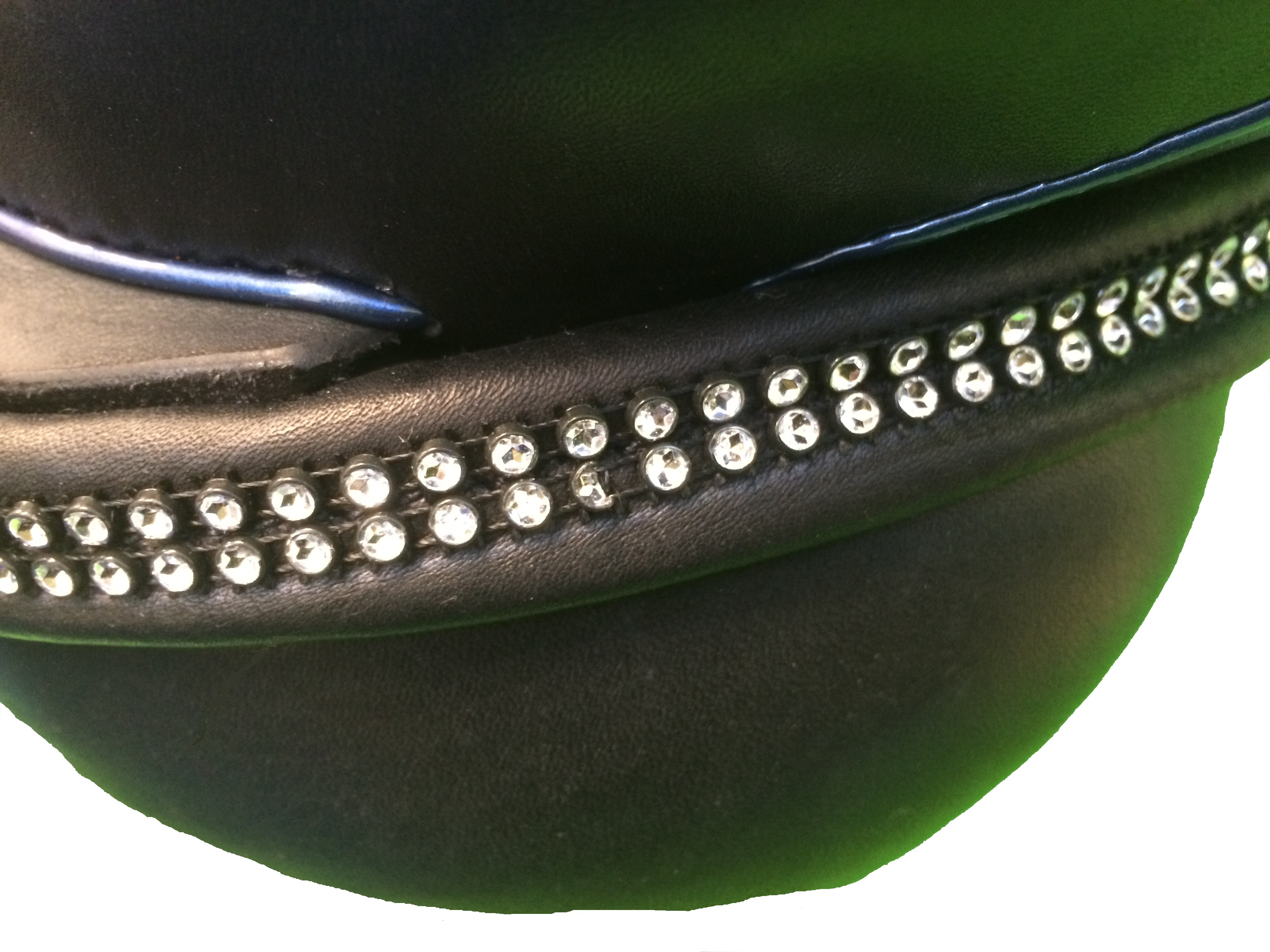 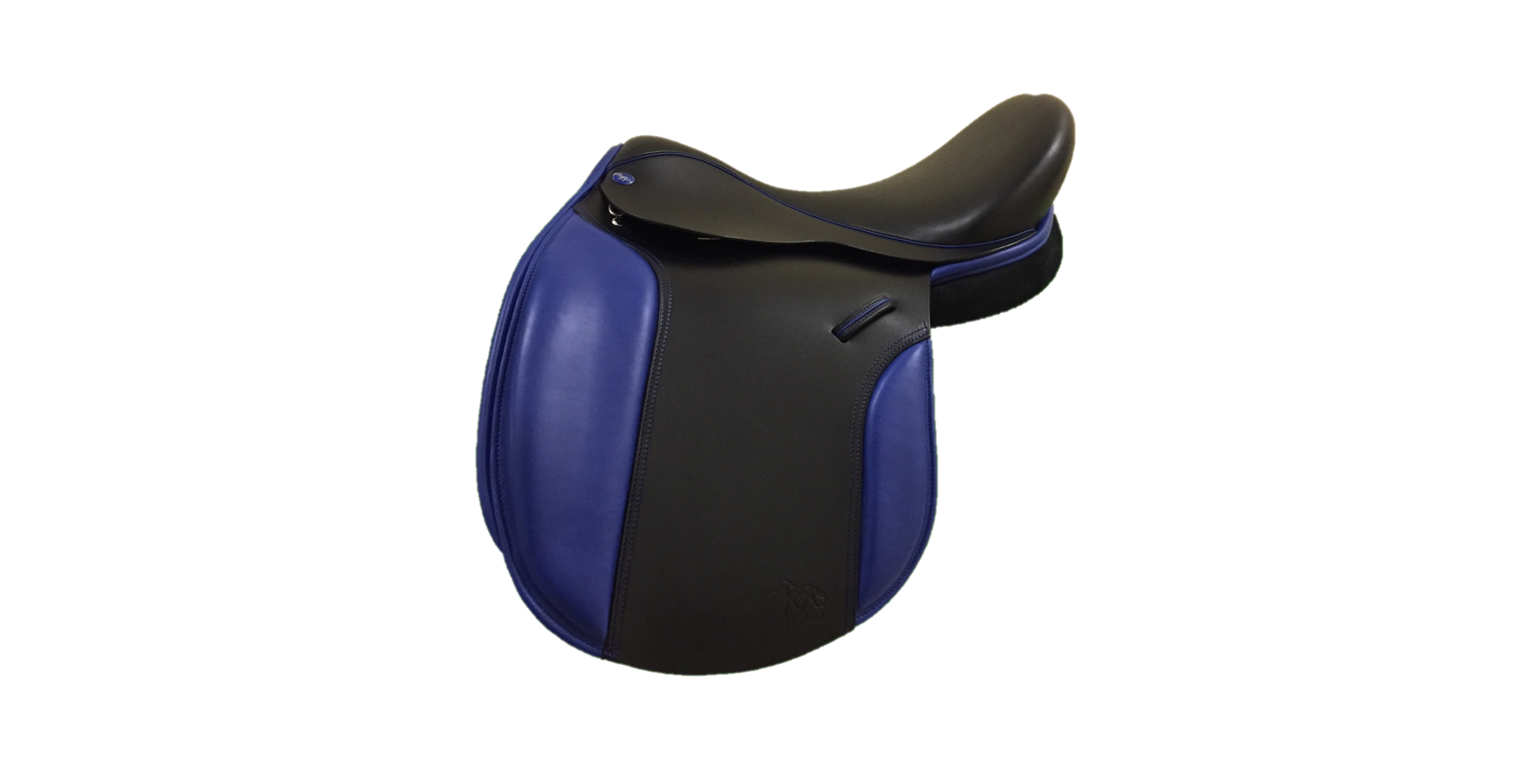 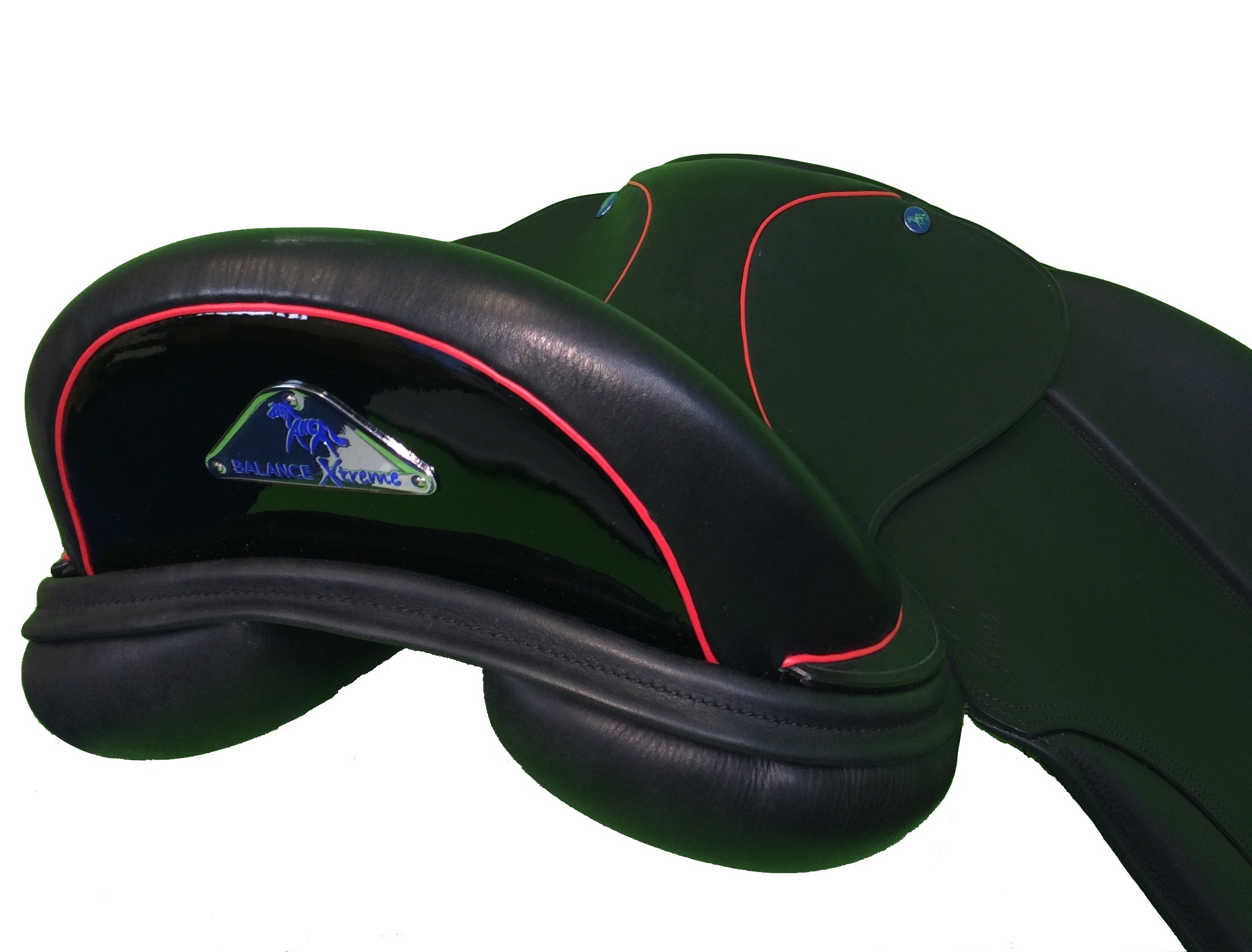